Mercedes-Benz has released teaser images of the upcoming CLS-Class facelift. The striking change seems to be the diamond-grille and the AMG-style bumper with big air scoops. The radical three-layered design of the headlamps on the current CLS is replaced with a more S-Class like detailing. The new headlights are called 'Multibeam' and are essentially similar in function to Audi's Matrix lamps. 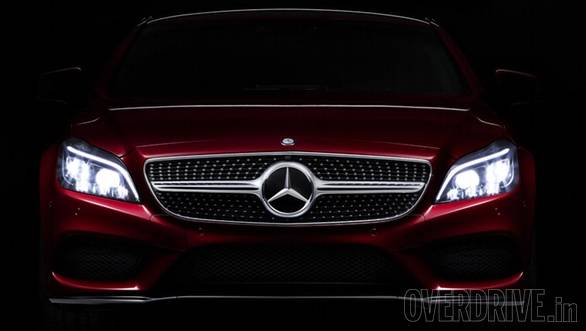 The CLS-Class facelift will feature the Mercedes-Benz diamond grille 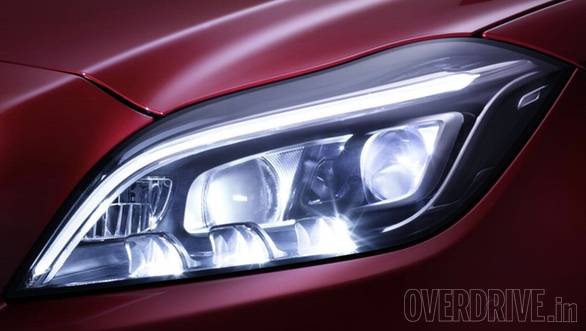 The Multibeam headlamps feature a cluster of 24 adaptive LEDs

The CLS-Class will not have two prominent eye-shaped projectors that are becoming common on all new Mercs. The inner lamp is a high-beam module that consists of 24 light emitting diodes (LEDs) that can be individually activated or deactivated to create a lighting pattern that is bright enough to light up the road, but glare-free for the oncoming traffic. The Multibeam lamps make use of the on-board cameras and the GPS to prepare optimum patterns for curves, turns and intersections. The outer lamp controls the low beam and also acts as a fog lamp. The headlight assembly also has three reflectors on its lower edge and they illuminate a small area in front of the car. The upper edge gets a seamless LED strip like the S-Class and can alter its colours between white for daytime-running function, amber for the turn blinker and a tacky blue for what Mercedes-Benz calls, a 'welcome home' function. Mercedes-Benz had launched the second-generation CLS-Class in 2010 and the refreshed 2015 Mercedes-Benz CLS-Class with the Multibeam lamps is expected to make its debut by the third quarter of 2014.