It has been confirmed that the 2015 Mahindra Thar will be launched in India on July 22, 2015. The new model which we caught testing recently will get both cosmetic and mechanical alterations. The Mahindra Thar will be offered with a hard-top option this time as this seemed to be quite a popular modification made by previous Thar owners. Other major changes to the exterior will be new bumpers, fender extensions and also a slight tilt at the rear-end of the canopy.

On the inside, the Thar borrows some equipment like air-con controls, a steering wheel and hand-brake and gear levers from the Bolero. Apart from this, it gets new chrome-ringed AC vents that are placed in the beige and grey themed centre console and a new chrome-ringed instrument cluster. These changes are a big improvement on the previously primitive interior. What's interesting is that the new Mahindra Thar is said to run the more contemporary 2.2-litre MHawk engine used in other Mahindra SUVs. Expect different engine tuning and gear-ratios on the Thar for it to cope well both on and off the road. To enhance off-road capabilities, it will get an optional Mlocker from Eaton which is a mechanical locking differential that should help get you out of the stickiest of situations. This system automatically engages and disengages depending on the grip levels detected and provides better traction than a limited slip differential.

All these changes should keep off-road enthusiasts content, but will also push the prices up a notch. 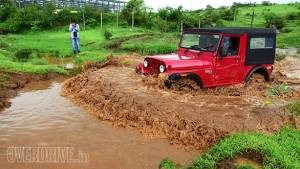