The 2015 Hyundai Sonata has been unveiled at the ongoing New York International Auto Show.  The car gets Fluidic design version 2.0. The appearance is less striking and looks more mature than the car it replaces. Hyundai has not revealed the price yet and the launch will mostly take place by the end of this year. 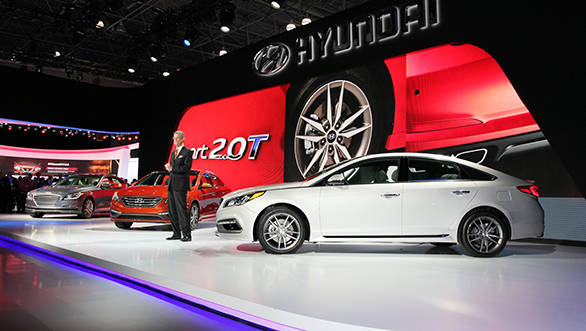 The exterior design is definitely more sober than before and closely resembles the Genesis sedan. The front gets a larger trapezoidal grille and an aggressive bumper design, the headlights have LED DRLs in them. The side profile sees 16-inch alloy wheels and a coupe like roofline. The posterior gets a lip spoiler and dual exhaust. 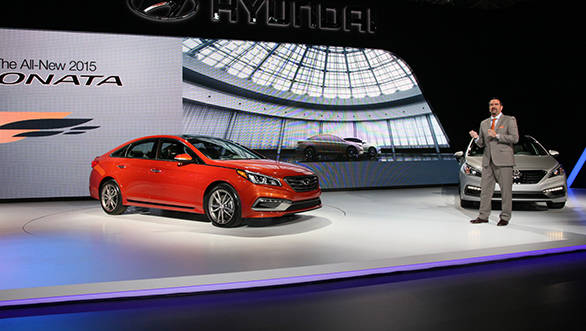 The interior is made with the focus on comfort and refinement. The engineers at Hyundai have worked hard to lower the noise and vibration levels inside the cabin and this has been achieved by damping the transmission mounting points and making extensive use of sound proofing materials. The buttons and controls on the dashboard have been angled a bit more towards the driver to afford better reach and make for a more intuitive cabin. The steering wheel has been designed to give more comfort to the driver with a redesigned steering column giving the 2015 Sonata better steering response and agility through turns. 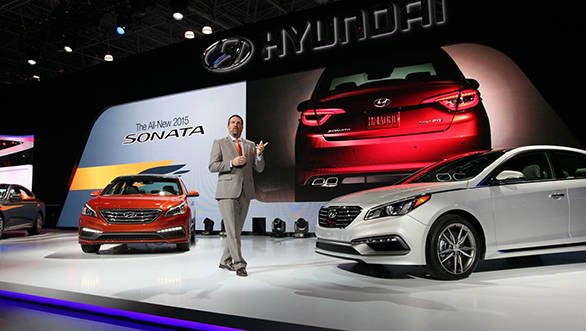 The front gets a larger trapezoidal grille and an aggressive bumper design, the headlights have LED DRLs in them

Entertainment is provided by an 8-inch display which can also be split to view navigation and music screens simultaneously. Bluetooth connectivity is supported for making calls and other voice related functions with USB/ aux-in / iPod jacks also present. Sirius satellite radio can be tuned in to and enjoyed through the 400watts Infinity premium audio system. There are safety systems such as lane departure warning, blind spot detection, rear cross traffic alert and a forward collision warning system doing their work in this midsize sedan. 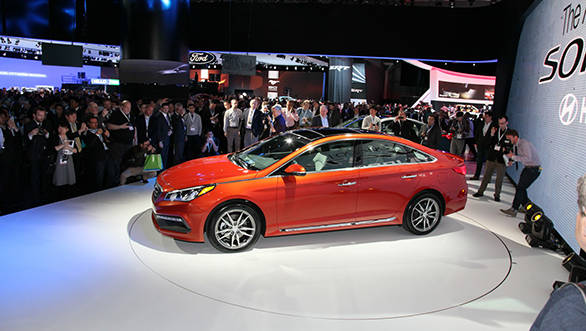 There are two engines under the hood. The first is a 2.0litre, four- cylinder, Theta II turbocharged GDI engine producing 248PS and 352Nm of torque. The second is a 2.4litre, four-cylinder, Theta II GDI engine generating 187PS and 241Nm of torque, with the engineers having detuned this engine to achieve better response in low rpm range. Both the engines are mated to a six-speed automatic transmission. 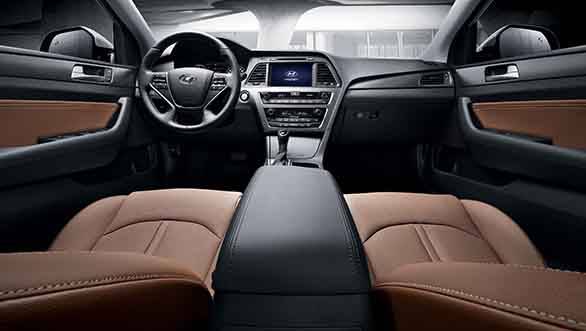 To know all the details about Hyundai's newest offering go through the exhaustive press release below or you can go through our earlier coverage of the 2015 Hyundai Sonata here. 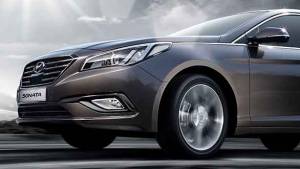