Despite being placed 51st overall during what Kush Maini himself described as "a disastrous qualifying session" on the weekend, the 14-year old managed to climb up the grid at the Asum Karting Ring in Kristiansand, Sweden. 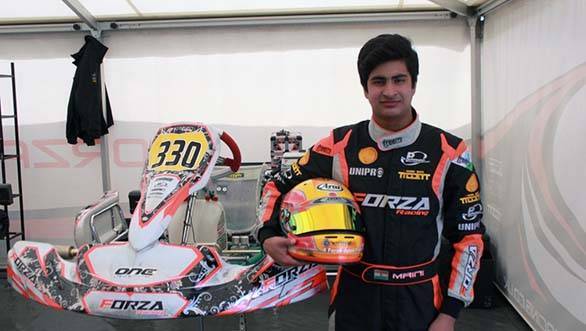 Owing to his overall ranking, Kush Maini had to start at 21st for all four heats. He was placed ninth in the first heat. He even managed to climb up to third in the second heat but because of a bumper that got knocked off his kart while tripping over a curb, he was excluded. He made up for that in the next heat where he managed to overtake 20 karts ahead of him and bag a win while the fourth heat saw him placed tenth. All of this culminated into a 14th place at the start of the grid for the Pre-finals.

He again surged ahead in the Pre-finals and bagged his first top-ten position in the series by finishing fifth. At the Finals, however, he managed to finish eighth.

The Forza Racing driver now stands at 10th overall in the Karting Championship and has his eyes set on the World Championship.

Kush said, "After such a disastrous qualifying session, things were always going to be difficult, that being said I am extremely satisfied with the way I drove, I always managed to gain positions and I'm especially happy with my win in my third heat and also my overtaking in general. I'd like to thank my team, Forza Racing who made some brilliant strategic calls and got the setup spot on when the conditions were difficult. Though the final result may not have been our ideal target, we can all walk away from the weekend satisfied with our performance."

The Kristiansand round of the Karting Championship was won by Danish driver, Christian Lundgaard of Ward Racing.