In 2014, Audi India had launched the RS 7 Sportback in India. And now, a year later,  they have a new one on sale. The new Audi RS 7 Sportback has got minor tweaks to the front and rear bumper as well as redesigned head and tail lamps. It comes in via the CBU route and is priced at Rs 1.4 crore (ex-Mumbai and ex-Delhi). 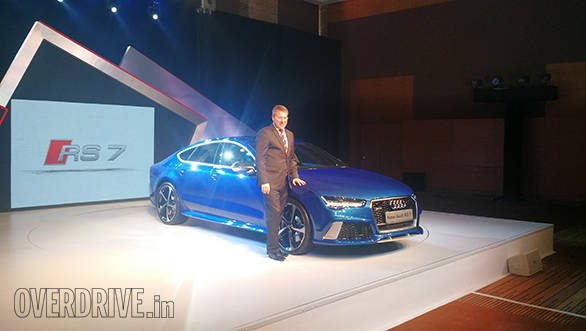 Powering the new Audi RS 7 is an updated 4.0TFSi turbocharged V8 engine which makes 560PS and 700Nm of torque. The figures remain unchanged from the previous model, but a start-stop system has been added. The 8-speed tiptronic transmission with quattro enables the new RS 7 Sportback to hit the 100kmph mark in just under 4s, says Audi. The RS 7 has a claimed top speed of 250kmph with an option to increase to 280kmph and 305kmph. Claimed fuel efficiency figure is 10.52kmpl.

Other changes to the Audi RS 7 Sportback include the Matrix LED headlamps, adaptive air suspension and optional Dynamic Ride Control. 20-inch wheels as standard but customers can opt for 21-inchers. For some sideways fun, the ESC with Sport mode can be deactivated. Inside, you get RS sport seats and RS 7 logos. A Bose surround music system is part of the standard equipment. The RS 7 is a pure four-seater and competes with the BMW M6 Gran Coupe. 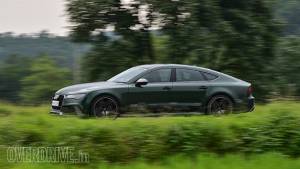