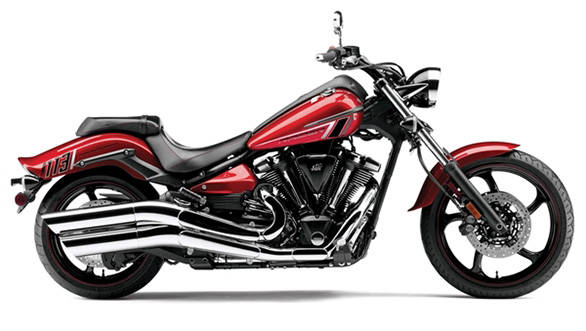 The 2014 Star Raider S is a more chrome-laden version of the previous Raider, sporting a classic chopper silhouette but with more upmarket details. It is designed especially for cruiser lovers, combining the laid-back cruiser stance, kicked-out 46mm forks, a bobbed fender, showcasing the traditional V-twin engine but with some modern technology updates.

The new Raider S gets chrome-plated triple clamps, fork sliders, air-box cover, engine covers, chrome-lined headlamp, risers and many more accents for a striking presence. The cast 5-spoke wheels are a great match for the double-cradle frame and the 21? front wheel. It also gets front and rear disc-brakes.

On the tech side, the 2014 Star Raider S is powered by a V-twin 1854cc mill that is fuel-injected and mated to a 5-speed gearbox and belt final drive. It also sports Yamaha's Exhaust Ultimate Power valve (EXUP) in the silencer.

The all-aluminium frame and swingarm help to keep some weight off the Raider S. The Star Raider S will be available in the US and UK markets for a base price of ? 8.76 lakh (as per current exchange rates) come July-end.