The 2014 WRC season ended predictably with a Volkswagen victory, with Sebastien Ogier leading Wales Rally GB end to end. The fastest driver in the field however was his teammate Jari-Matti Latvala, who dropped from a challenging position for victory when he went off the road on Day 2. VW scored a record 12 WRC wins this season, beaten this year only on home ground in Germany. When Latvala went off the road Ogier eased his pace, winning only four of the 23 stages all event, with the attention now focussed on the fights for second place overall and in the Manufacturers' standings, with Citroen ending up far away in second place and M-Sport third. M-Sport driver Mikko Hirvonen finished a popular second on his final WRC event before retirement, but Kris Meeke challenged hard but an off road error led to tyre problems, and his potential podium position went instead to his teammate Mads Ostberg. Ostberg finished the season with the most fastest stage times by a non-VW driver, Hirvonen the highest placed non VW driver in the championship ahead of Ostberg. Nasser Al Attiyah cruised to take the WRC2 Drivers' championship title leaving Jari Ketomaa powerless to beat him despite leading the category end-to-end. 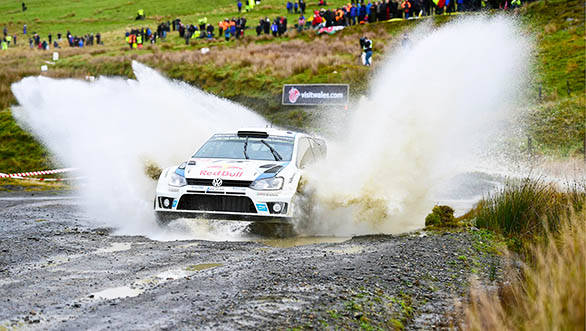 This year's Rally GB was an event of two parts. The first day saw a fascinating battle between the two VW drivers in conditions where unusually (for a gravel rally) running first car on the road was an advantage, but hopes of a complete VW domination was denied firstly when Mikkelsen went off the road on stage 2, then by the Latvala disaster. When the battle ended Days 2 and 3 saw a fascinating fight for second place between Hirvonen, Meeke and Ostberg. With only split seconds between them, Meeke was dismayed when he was given a controversial ten second jumpstart penalty, and later Ostberg was given an equally controversial penalty for a late control arrival, but in the end it did not matter, Hirvonen was able to cement his position when Ostberg had a tyre delaminate unexpectedly late on Day 2, and then Meeke had his own tyre issues on Day 3.

Both M-Sport and Citroen needed both their drivers to finish the event safely which in Citroen's they eventually did. Hirvonen matched high speed with reliability but early on it was Ostberg who gave chase to the Volkswagens but Ostberg found his car hard to handle on the Friday afternoon and he slipped back. The lead in the battled between Hirvonen, Ostberg and Meeke for second place during Day 2 changed three times in as many stages, but when the stages became treacherously slippery on the Saturday evening Hirvonen edged ahead. Meeke said the surfaces were like a gravel version of Monte Carlo's black ice. The final day started with Meeke 3.4 seconds behind Hirvonen but on the first stage of Day 3 he slid into a ditch and damaged his tyres. Meeke's battle now was to make sure his tyres were in good enough condition to complete the remaining stages and the road section back to the finish at Llandudno. Elfyn Evans in the second M-Sport car drove a measured event but gradually climbed up to finish in fifth place, so M-Sport gained five points more on this event than Citroen, but Citroen took second place in the Manufacturers' title by two points.

Hyundai had their own misfortunes when their second driver Juho Hanninen went into a deep ditch on Day 1, and Hayden Paddon had power steering failure but eventually finished tenth. All three drivers said they had traction and handling difficulties, but Thierry Neuville persevered to finish fourth. Of the non-team drivers, top was Ott Tanak in a works loaned Fiesta WRC fitted with DMack tyres (on the company's 50th WRC event appearance), another superb performance on this event from three years ago when he finished sixth. It was a big disappointment when Pirelli WRC driver Henning Solberg retired on the final day after lying ninth  and scoring a scratch time  in the regular M-Sport test car renovated for the occasion. Top Pirelli driver was Martin Prokop who finished ninth, yet another superb result for this private team car. 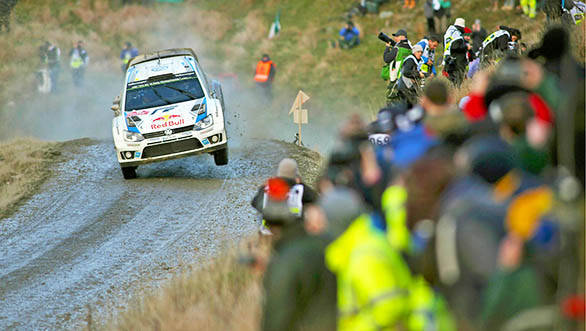 VW beat their own points score for the season, gaining a total of 447 points compared to 425 in 2013. Ogier had to fight much harder this year, his winning margin in 2013 having been slashed from 114 to 49  less than two overall event victories. Hirvonen finished fourth in the Drivers' series behind Jari-Matti Latvala and Andreas Mikkelsen, the best non-VW, with Mads Ostberg and Thierry Neuville separated by three points in fifth and sixth places respectively.

The one outstanding drivers' title waiting to be resolved on the event was for WRC2, when Nasser Al Attiyah only had to finish seventh in the category to be unbeatable, however well Jari Ketomaa did. Ketomaa did his best by winning in his Fiesta R5, leading from start to finish, with Al Attiyah cautiously tackling the stages when they became exceptionally slippery. For some time Al Attiyah in his RRC Fiesta was lying eighth in WRC2 but finally rose to a safe sixth place when second placed Bernardo Sousa went off the road. Slowly learning the four-wheel-drive techniques in these extremely slippery conditions was Stephane Lefebvre (in the only Citroen R5 on the event) who went off the road on Day 2 and his reverse gear broke. Lorenzo Bertelli ended his WRC season with a spell of fastest WRC2 times and finished second, ahead of Matthew Wilson on his first rally in over a year. For the tyre companies it was three different makes on the podium DMack-Pirelli-Michelin. Al Attiyah has to wait another week to see if he can also secure his 10th Middle East championship title.

In WRC3, as in the overall and WRC2 categories, the winner led from start to finish. This time it was Alastair Fisher and he headed Martin Koci, while third place was a surprise, the former Citroen C2 driver Henri Haapamaki who was driving on his first WRC event outside Finland, and made some best times in between some problems. In the WRC3 Drivers' and the Junior championships the only outstanding question was who would be runner up in both to Stephane Lefebvre. Both runner up places went to Alastair Fisher beating Koci, Quentin Giordano and Christian Riedemann.