2014 Suzuka 8 Hours: Takahashi, Haslam and van der Mark win for the second year in a row

The MuSASHi RT HARC-PRO team seems to be making it a habit of winning at the Suzuka 8 Hours, taking their second win in as many years. The team of Takumi Takahashi, Leon Haslam and Michael van der Mark took victory at the race, despite the fact that the conditions weren't all that easy, with rain causing the start to be delayed. The delayed start led to the fact that the race was truncated and was run for only 6 hours. 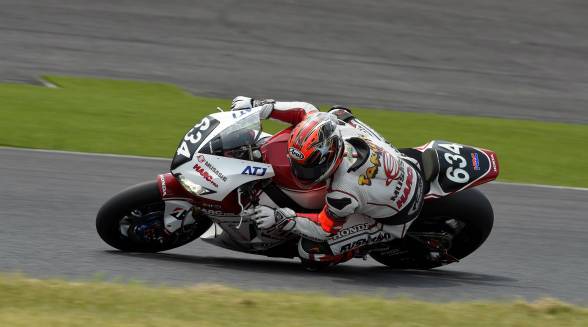 Takumi Takahashi in the lead at the 8 Hours of Suzuka

The 2014 edition of the race started off with chaos aplenty. This was because the rain was still coming down, which meant that the traditional Le Mans start was even more chaotic than usual. For the second year in a row, the FCC TSR Honda team suffered bad luck. Kousuke Akiyoshi led the pack from the first lap of the race, but the team's efforts came undone with he crashed at 130R. The rider brought the motorcycle back to the pits despite the fact that he had a broken leg. The lead then went to the MuSASHi HARC-PRO team. Second on track was the Yoshimura Suzuki Shell ADVANCE team with Takuya Tsuda, Randy de Puniet and Josh Waters.

Even though the Safety Car was deployed on multiple occasions, the order at the front didn't change. Takashi, Haslam and van der Mark won the race, with Tsuda, de Puniet and Waters second, and Team Kagayama's Yukio Kagayama, Noriyuki Haga and Dominique Aegerter finishing third.

It was disappointment for the Yoshimura Suzuki Shell Advance team of Kevin Schwantz and Nobu Aoki unable to finish the race after Aoki crashed at 130R.