Honda Motorcycles has always offered a wide range of motorcycles for its customers to choose from. That has been due to its constant addition of new models and updation of older models over time. Keeping in line with this trend, it has introduced two new motorcycles to its overseas lineup. The new models are 2014 Honda Interceptor and 2014 Honda CB1100. 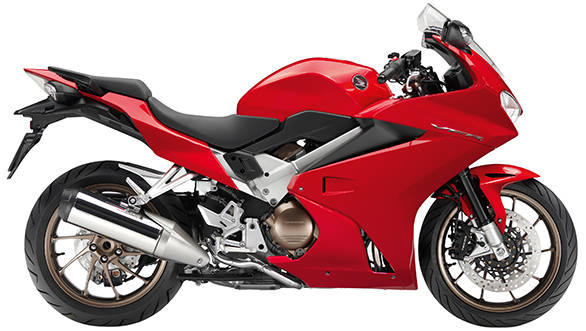 The Interceptor comes in standard and deluxe variants. The tourer is powered by a liquid cooled, 782cc, V4 engine mated to a close shift six-speed gearbox. The suspension is fork type with spring preload at the front and Pro-Arm single-side swingarm with Pro-Link single shock at the rear. The riding position is upright to provide comfort on long rides. The seat is adjustable and can vary from a height of 31.0 to 31.8 inches. The wheels now get 10-spoke alloys and a single muffler exhaust system improving the style quotient as well as making the bike more lightweight. The kerb weight of the standard version is 529 pounds (240kgs) while the deluxe is slightly heavier at 536 pounds (243kgs). The deluxe model comes loaded with traction control, ABS, self-canceling turn signals, grip heaters and a centerstand for riders. Next is the CB1100, which also comes in standard and deluxe variants. The bike features a timeless vintage design. Engine on this bike is the 1140cc DOHC which is coupled to a six speed gearbox.  The instrument cluster displays a trip computer, gear position indicator and fuel efficiency readings. The classic design is further accentuated by a classic cover seat, four-into-two exhaust system and newly restyled side covers. The deluxe version also gets ABS and a fuel tank which is larger by 1.8litres for a longer range.