Now this is the sort of stuff that makes the motorsport fan weak in the knees. The Audi R18 eTron Quattro, yes that very same car that won the 24 Hours of Le Mans in 2012, has been showcased at the 2014 Auto Expo. 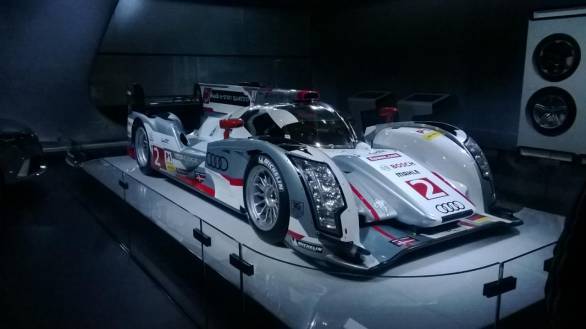 A quick background about the car. Back in 2011, Audi built the R18 TDI, which had several special characteristics, one among which was that it became the first ever Le Mans Prototype car to race with all LED headlights at Le Mans, and set the design trend for the marque's future Le Mans cars. Of course, it helped that Marcel Fassler, Andre Lotterer and Benoit Treluyer won the 2011 edition of the event in this particular car.

For 2012 Audi developed the R18 ultra, that was a modified version of the 2011 car, this time with severe weight reductions. There was also the R18 eTron Quattro, which was a hybrid version of the R18 ultra. The hybrid car made use of a Williams Hybrid Power flywheel system to store energy, 500kJ of which was then made available to the front wheels of the car at speeds above 120kph, essentially giving the car four-wheel drive or Quattro. The R18 eTron Quattros finished first and second at the 24 Hours of Le Mans, with Fassler, Lotterer and Treluyer at the wheel of the winning car, ably engineered to success by Leena Gade.

And it is this car that you get to see at the Auto Expo - the first hybrid car to win the prestigious 24 Hours of Le Mans, no less!