Sebastian Vettel was on pole at the Indian Grand Prix back in 2011 and 2012. Well, 2013 proved no different, with Vettel storming to the front of the grid when he clocked a time of 1min 24.119secs, a new pole record at the Buddh International Circuit. The Red Bull driver, who will almost certainly seal his fourth championship title on the trot this weekend, was over a second and a half quicker than his nearest rivals. Competition came in the form of the two Mercedes cars - Nico Rosberg and Lewis Hamilton who clocked the second and third fastest timings. It was Rosberg's best qualifying session so far at the Buddh International Circuit, something he seemed visibly pleased about. However, for the two Silver Arrows to challenge the Red Bull as it flies down the start finish straight into Turn 1 at the BIC, will take a touch of magic. For now, it looks like Vettel will storm to a fine victory from pole, pop the bubbly and take his world championship title home too. 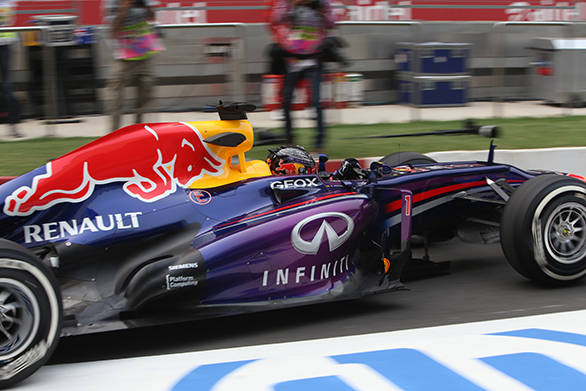 Mark Webber was able to do no more than fourth on the grid, with a timing of 1min 25.047secs. While Ferrari driver Felipe Massa took fifth place on the grid. Felipe's team-mate, Fernando Alonso could do no better than eighth place on the grid. Lotus driver Kimi Raikkonen clocked the sixth fastest time, just ahead of seventh-placed Nico Hulkenberg in the Sauber F1. McLaren drivers Sergio Perez and Romain Grosjean rounded off the top 10.

Perhaps the biggest shocker of the qualifying session was the fact that Romain Grosjean, a driver who has shown tremendous improvement over the last few races, even leading the Japanese Grand Prix at one point, was in the relegation zone at the end of Q3. Grosjean declared that he'd probably been knocked out because he attempted to qualify on medium compound tyres, while the rest of the pack was out on soft compound tyres that clearly worked better. Grosjean put the second Lotus in 17th place on the grid.

Daniel Ricciardo slotted into eleventh in his Toro Rosso, while the two Force India cars of Paul di Resta and Adrian Sutil were twelfth and thirteenth on the grid. Jean-Eric Vergne, Valtteri Bottas and Esteban Gutierrez were up next. While 18th to 22nd were Pastor Maldonado, Jules Bianchi, Giedo van der Garde, Charles Pic and Max Chilton.