Walking through the Formula 1 paddock, there's often a chance you'll see a red cap bobbing along in the distance. And for any Formula 1 fan, pre or post the release of the movie Rush, there is little doubt as to the identity of the man underneath that cap. And so it was a happy coincidence that we spotted Niki Lauda, three-time Formula 1 world champion, walking through the paddock at the Buddh International Circuit. Of course, Lauda is here because of the role he plays within the Mercedes AMG F1 team - non-executive chairman for the German squad. 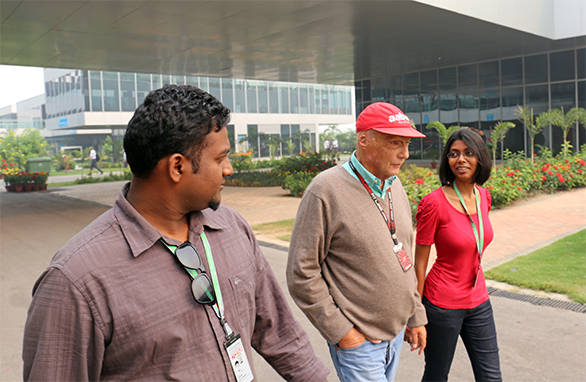 Post the success of Rush, the story of the 1976 season of Formula 1 is no longer relegated to the minds of just the F1 enthusiast. The tale has spread far and wide, and it's this fact that Lauda seems to like. "Already in Austria alone the film has made 37 million dollars," he says of the obvious success of the motorsport movie that has captured everyone's attention. "This movie is for your generation," he declares. "It's for people who have no idea what happened that season of Formula 1."

That being said though, there is certainly some amount of exaggeration to the film itself. Back in the 1970s, when Niki Lauda and James Hunt were going for each other's throats on track, they were also friends and rivals off track. "Now you have to be careful," Niki says talking of the treatment of the film itself. "When Peter Morgan came and spoke to me about doing the film, he said that the story wasn't going to be a racing film, it was going to be a film about two people, which is why it's been treated the way it has. It isn't really a movie to recreate the championship battle as much as to show two different personalities." And there's no doubt that the actor chosen to play Lauda's character has certainly done a stellar job. "You mean Daniel Bruhl, yes he's terrific. He's done an excellent job," Lauda declares.

But this is the Formula 1 paddock, and as much as the Indian Government would like to try and classify it as entertainment instead of a sport, a sport it is and a sport it will remain. And from a sporting and technical side, Formula 1 is certainly gearing up for some tough times ahead, particularly with the new technical changes coming up for the 2014 season. "I think next year is going to be a big challenge, because we start with an all new regulation. So we have to think about many factors, the most important of which will be the engine. We have turbocharged V6 engines, with hybrid motors and 30 per cent less fuel." But given the fact that all the teams are starting from scratch, does it make things easier? "It's same for all, you start developing a new car, a new engine, everything. And I think for us, Ferrari, Renault and Mercedes, it's the same battle in terms of the engine."

The project within the Mercedes camp itself hasn't been easy though, not only in terms of the technical development that needs to take place and the engineering acumen required to ensure that the Mercedes team is up there competing with the best, but also in terms of the cost involved in the project. "It's a 90 million dollar project in terms of engine development alone, and it's not a short term project, it's for three years that we are looking at developing the engines. So yes, this is tough," Lauda remarks.

For the 64-year old Austrian, who was mistaken for an Australian and asked questions about cricket at the Indian GP, the journey from racecar driver to a managerial role within Formula 1 has been long. Along the way he's seen Formula 1 change from the times of that 1976 season to a more sanitized environment where hybrid motors are coming into play. Lauda has weathered it all, with that typical no nonsense attitude. The same attitude that enables him to brush aside daft questions with a brief "I'm Austrian," before walking off. We're big fans.