Ford has now officially rolled out the ten millionth Mustang from its Flat Rock Assembly Plant in Michigan. We say officially because two days ago there was a post shared on Instagram speculating that particular Mustang to be the ten millionth specimen, and indeed it was the one. Ford mentions that the Mustang is the best-selling sports car of the last 50 years, is featured in more movies and has more Facebook followers than any other car in the world. The 10 millionth Ford Mustang is a 460PS making 2019 Wimbledon White GT V8 six-speed convertible with VIN 001  the first serialized 1964.5 Ford Mustang that featured a 164PS, three-speed V8. More than 60 Ford Mustang owners of all model years assembled to pay a tribute to the 10 millionth Mustang by spelling out the milestone with their cars. This was then followed by a P-51 Mustang fighter plane flyover by its namesake. 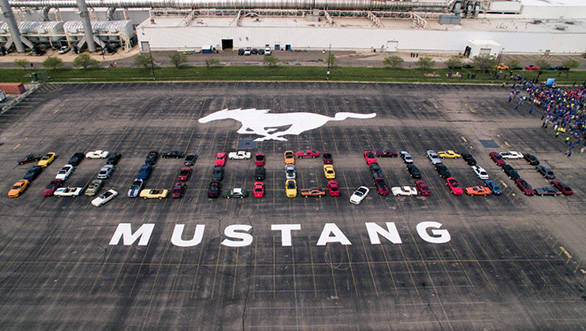 "Mustang is the heart and soul of this company and a favorite around the world," said Jim Farley, president of global markets, Ford Motor Company. "I get the same thrill seeing a Mustang roll down a street in Detroit, London or Beijing that I felt when I bought my first car  a 1966 Mustang coupe that I drove across the country as a teenager. Mustang is a smile-maker in any language." 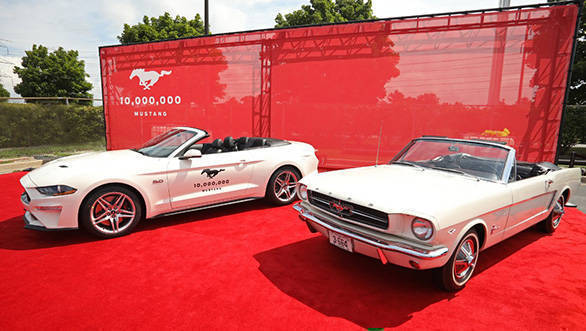 The Mustang Bullitt returns as a 2019 model powered with 480PS 5.0-liter V8 engine. The classic California Special also returns with unique design and trim enhancements. The 2019 iteration of the 5.0-liter V8 Mustangs get rev-matching downshifts in the six-speed MT models, while EcoBoost gets an optional quad-tip exhaust. All-new custom-tuned 1,000-watt B&O high-performance sound system along with Apple CarPlay compatibility for Ford+Alexa and Waze via Sync3