One year ago Lewis Hamilton was forced into retirement at the Australian GP - at a race that would indicate the struggle the 2008 F1 world champion would have to endure on his way to his second Formula 1 title. One year hence, the woes of the past were clearly behind him, with the Mercedes team proving to be strong all through testing. Then Hamilton started his Australian GP campaign with pole position at the track. And after that, when the five red lights went out at Melbourne, he also managed to hang on to his first place, putting a sizeable gap between himself and team-mate Nico Rosberg on the restart under the Safety Car. 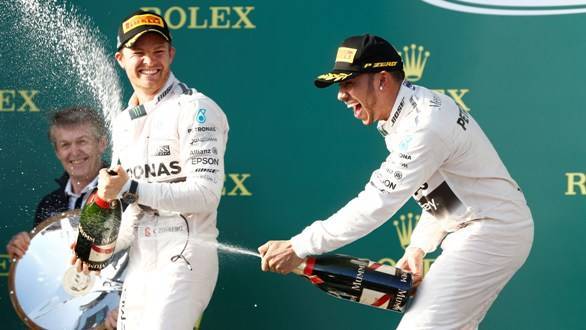 The reason that the Safety Car had been brought out at all was because of the first lap chaos at the back of the pack. Carlos Sainz Jr in the Toro Rosso nicked the Ferrari of Kimi Raikkonen, who in turn ended up giving Felipe Nasr in the Sauber a hard time, with Lotus driver Pastor Maldonado caught out in the process. This sent Maldonado into retirement. Daniil Kvyat in his Red Bull Racing car and Kevin Magnussen in his McLaren didn't make it to the five red laps, their cars suffering problems on the warm up lap. The other Lotus of Romain Grosjean would end up retiring on lap 1 with mechanical trouble. Which meant that by the second lap of the race there were merely 13 cars in the F1 grid.

Up ahead though, no one could catch the Mercedes cars, with Felipe Massa in the Williams, the best of the rest of the pack, for the first part of the race. But it was a hard charging Sebastian Vettel in the Ferrari who would eventually claim third position in the race, even as his team-mate Kimi Raikkonen would go into retirement.

Raikkonen's retirement would mean that Sauber driver Felipe Nassr would score his first top five finish on his debut with the Swiss team. While Daniel Ricciardo would be able to finish sixth for Red Bull, in stark contrast to his on track performance at his home Grand Prix last year.

In stark contrast, Mercedes looks set for another strong season in 2015. The battle will rage on between Hamilton and Rosberg. Looks likely to be interesting!